My brother lifted the white tarp and rushed me into the tent.  Inside it was dark except for spotlight circles aimed at the stage as people noisily filed into the tiered seats.  The fair’s volunteers monitored the lines and checked tickets with military precision, even stamping hands for a secondary check down the line.  The two of us didn’t bother to go cut in line and climbed the steel supports under the seats instead and wriggled into the aisles unnoticed before calmly taking a seat on the edge, the seats nobody wanted.  The seats around us filled up fast and soon the lights went down.  The sound of mallets battering on drums rolled into the audience from the stage wings and for the next forty minutes, I forgot about our parents and all the doctors. 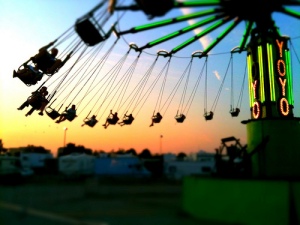 Sirens pounded in my head as I leapt up from the shattered glass table I didn’t see. Pops was carrying the heavier bags and ran ahead down the dark and empty street. “They ain’t gon’ come quick enough. Haha, we good. We good,” he whispered to himself while I limped behind. After an hour, we made it under the Jenson bridge and unpacked the goods in our bags to wheelbarrows. My leg was cut up and bleeding. It stung like someone was taking a cheese grater to my calves, but I kept packing and lay black tarp over the loot. “You ever think this’s wrong?” I asked as pops lifted the rubber handles. The rusted metal dug back into the mud and pops squeezed my jaw. His eyes were flat, like manhole covers, and he started talking like he was reading from a book. “Morality is optional,” he said. “And we opt out a long time ago.” He let me go and we got going down the moonlit trail. As the handles of my cart bounced in my hand over the gravel, I thought about what he said and couldn’t shake the feeling that what he really meant was that we’ve never had many choices and damnit this was the best one.

There was a rustle in the Faustus bushes.

“Go on,” said Giglosh, “Your pet rock was the one who threw it in there, so you have to go get it!”

“It’s not stupid and it’s not a turd! How many magical pendants do you have?” Giglosh shot back, “And it’s not right to throw other people’s things into bushes, especially Faustus bushes, you little pest.”

“Giglosh is right,” Tiam said, trying to avoid a fight. “Why don’t you apologize—” But the rock retracted it’s limbs and facial features before plopping on the ground, like a lifeless pebble indistinguishable from the rest. “You can’t always do that when you’re in trouble!”

“My necklace! Go!” said Giglosh, pushing Tiam toward the bushes. “My grandmum gave that to me!”

Tiam could see the pendant winking light near the bush’s trunk, but when he reached his hand close to the leaves, the Faustus bushes trumpeted a twisted song that hurt his ears. Its branches thickened to blood-red arms and gripped over his elbow, pulling him in. Finally, his fingers found the pendant and jerked out of the bush as fast as possible. The bush relaxed back into its quiet, manicured beauty and Tiam dropped the necklace into Giglosh’s hand.

“I still remember the first time I came here and you pushed me into one.”

“Oh, we were just children then. It seems funny now.”

“Yeah, but I had my tenth birthday. Double digits, that is. And either way, it’s still funny.”

Sally wasn’t the smartest of girls. She was the dumbest, which given circumstances at home on top of a mandatory fad of thongs and fishnet stalkings, led her to be the sluttiest. She could be found sitting at the tops of school stairs, listening to boys’ exploits with her mouth already hung in the shape of an open-mouth kiss. Her idea of protecting her reputation was to say, in between late-night study room smooches, “This is either the best idea we’ve ever had, or the worst.” It was a trick she’d learned years ago: to give both possible extremes so that it allowed her room to maneuver if things went wrong. No one was dumb enough, though, to fall for this trick. When teachers demanded homework she had not prepared, she’d say, “Wow, well either it was stolen by a stalker who likes to, you know… masturbate to my handwriting, or I just forgot.” She never quite understood why teachers were so stubborn to reason as they marched her to the Dean’s office.

On the fifteenth day of the rainy season, I was in the doorframe watching the mud pool in the garden with a Malboro in my hand.  I felt defiant, in a way that I knew to be ultimately small, to be a human—a goddamn human—who built the roof over his head and cheekily lit a cigarette as the rest of the world turned to mush, like pulp washing down cement rivers.

The echo of feet bounding inside found me and soon Rachel came to the doorframe with a jar and pail, her raincoat already on.

“Worms!”  She shook her head like that wasn’t what she’d planned on saying.  “Can I play outside?”  I told her sure as long as she stayed in the yard and away from the roses.  She leapt over slick flagstones and into puddles like it was the first and last day of her life and, throwing the butt into the rain, I tried to remember the last time I felt like that.

Shattered glass and whips of coffee swung through the café while tires dragged tablecloths under treads, slinging sweethearts and servers to the doors.  A crack of steel against the bar table and the hissing of an engine signaled the proprietor to open his eyes and catch sight of a silver ‘92 Sudan, crumpled with stools through its windows, pinning him in a corner lined with sweeteners and creams.  Suddenly the silver door kicked open and the owner’s eyes grew round like golf balls.  Under the door stepped a pair of ribboned shoes, followed by the flushed face of a six-year-old through the window frame, her cheeks red like watermelon wedges.